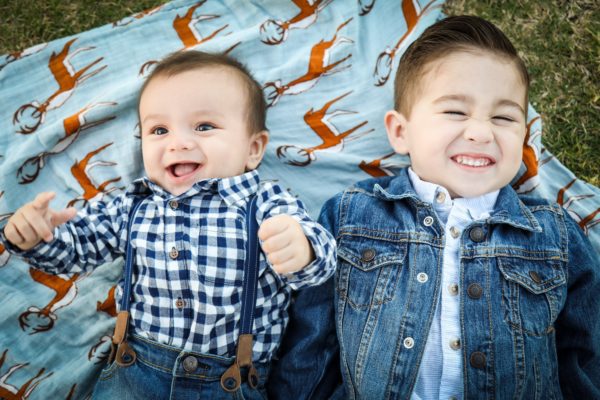 The parent of a child with obsessive-compulsive disorder (OCD) may feel confused about what their child is experiencing and may be at a loss for the best ways to relieve them of any distress. In this guide, we’ll outline some of the most common signs of OCD in children and the actions caregivers can take to help.

What are the signs of OCD in a child?

OCD often first develops in a child at an early age. Younger children can have a different experience of OCD than a teenager or adult, as their sense of awareness, reality and rationalization skills are not yet as keenly developed. They may feel OK again after completing a ritual, but not be able to analyze the obsessive thoughts underpinning this pattern of behavior.

Symptoms can fluctuate with different life events and will usually change over time. There are also countless different indicators of OCD in children and adults alike. However, some common symptoms may suggest a child has OCD. These include:

Children with OCD sometimes have a fear of contamination, becoming ill or catching specific diseases. They may avoid touching things they perceive as dirty or worry when other people sneeze and cough. They might check expiration dates on food and engage in prolonged, repetitive hand-washing, showering or cleaning of objects.

A child might worry that their thoughts or actions will cause harm to a loved one. They may practice rituals, like touching everything in a room or lining things up in a certain order, because their OCD tells them it will prevent bad things from happening.

Sometimes a child will feel the need to do something until it feels “just right,” even if they don’t know why or what that means. Satisfying this feeling may include entering and exiting a room repeatedly or rereading or rewriting something.

Alternatively, the compulsion can manifest as counting certain objects, words, numbers and multiples of numbers. The child may excessively fret about the neatness of their schoolwork, feel they have to arrange things in a pattern, or tidy their room in a specific way.

A child with OCD may be repeatedly disturbed by thoughts of all the bad things they could do. This can lead them to practice compulsive behaviors, but it also sometimes encourages avoidance. For example, the child might avoid touching knives, even plastic or toy ones, because they’re afraid they’ll hurt someone with them.

This compulsion can be rooted in a fear of harm to loved ones and a desire to protect the family home. It can manifest as checking water taps or the locks on windows and doors. The child may go back to check something several times in case a mistake was made.

A child who experiences OCD may have difficulty throwing things away, even if the items are old or seemingly useless. This can lead to a tendency to hoard objects.

Rituals that engage others

Sometimes a child with OCD involves friends or family members in their behaviors. They may show intolerance to certain words or sounds, ask a person the same question multiple times, seek reassurances about the future or confess “bad” thoughts they’re having to a family member.

The signs of OCD can be very subtle, and caregivers may not always pick up on related behaviors. Some compulsions are easy to pick up on, like excessive hand-washing. But others are invisible, such as a child habitually counting words in their head. Obsessions can also be much harder for anyone except the child to be aware of.

What can you do if you think your child has OCD?

Children often come to their caregivers first for advice or reassurance on how to deal with their problems. Parents understandably want to offer instant relief if they can see their child is distressed; as a result, they may continually reassure their child that their hands are clean or their family is safe. But reassurance can do more harm than good in the long term, as relief is short-lived and the child isn’t given the opportunity to cope independently or overcome their underlying anxiety. Furthermore, people with OCD, including children, are often not convinced by their loved one’s reassurance. In other words, the OCD causes them doubt and the cycle of anxiety and compulsions repeats itself again.

Instead, treatment for OCD should focus on changing the way children react to their obsessive thoughts and actively engaging in activities to acquire new learning about their fears..

The gold-standard treatment for OCD at any age is exposure and response prevention (ERP) therapy. It’s a type of cognitive behavioral therapy (CBT) that involves slowly exposing the child to their anxiety triggers. At the moment when they would typically engage in one of their usual compulsive behaviors, the child is encouraged to refrain from avoidance, safety behaviors, and compulsions. With time and effort, the anxiety often reduces, and established thoughts lose their potency as the child learns that the feared outcomes will not occur and that they can handle uncomfortable emotions..
To get in touch with a licensed therapist who can help with your child’s OCD, schedule a free 15-minute call with a member of the NOCD clinical team.