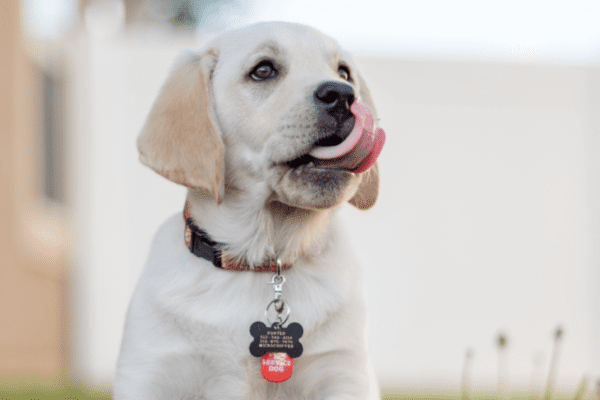 OCD can be a little bit like a new puppy.

It follows you everywhere, it requires tons of attention, and when you say “no,” it seems instead to hear: “DON’T STOP!” If you’ve ever trained a puppy, you know how hard it can be to discipline an adorable ball of fluff.

Disciplining a puppy might feel uncomfortable, but it’s crucial. Letting your puppy get away with mischief will turn him into a dog who jumps on the mailman and pees on your carpet. OCD definitely isn’t fluffy or cute, but managing it through Exposure and Response Prevention (ERP) therapy requires a lot of energy, repetition, and patience– kind of like training a dog.

ERP, which the International OCD Foundation identifies as the most effective treatment for OCD today, entails purposely exposing yourself to the thoughts, images, objects and situations that make you anxious and/or start your obsessions, and making a choice to withhold from a compulsive behavior or response once the anxiety or obsessions have been purposefully triggered. This can be distressing, especially during the preliminary stages of treatment when the OCD brain is accustomed to using compulsions to immediately eradicate uncomfortable or anxiety-provoking thoughts. Even people with a lot of experience doing ERP will find that  more challenging exposures trigger a higher level of discomfort.

Purposefully triggering anxiety? That might seem counterintuitive. It also might leave you feeling overwhelmed and exhausted. But giving yourself the opportunity to experience anxiety, and gradually get used to it, is critical, because it sends a powerful message to OCD: it doesn’t get to make the rules around here. You– not your OCD symptoms– are in charge of your life.

Think of it this way: if you’re training a puppy to sit, and you give up halfway through the lesson, rewarding him with a treat despite his inability to follow instructions, then you’ve trained him to see himself as head honcho. Next time, he probably won’t sit, either. Giving up on an exposure by giving in to a compulsive behavior similarly rewards OCD. But the reverse is also true: strengthening your ERP muscles by exercising your ability to practice exposures and ride out the anxiety they induce shows OCD you’re taking a stand.

Let’s say Dan struggles with Harm OCD. Dan isn’t a violent person, but he fears that if he’s given a knife, he’ll use it to hurt someone around him. He has a counting ritual he performs, which temporarily causes the violent imagery to dissipate. Dan’s friend invites him to a cooking class, and Dan knows he’ll be expected to use a knife around other people–  a major trigger for him. But Dan both values his friendship and enjoys cooking, and knows he would enjoy the class if it wasn’t for OCD. Dan has two choices:

And if you know is struggling with OCD, have them schedule a free call today with the NOCD clinical team to learn more about how a licensed therapist can help. ERP is most effective when the therapist conducting the treatment has experience with OCD and training in ERP. At NOCD, all therapists specialize in OCD and receive ERP-specific training.

Does OCD conflict with your values and interests? How do you take a stand when OCD tries to keep you from participating in the activities and hobbies that give your life meaning? We’d love to hear from you!