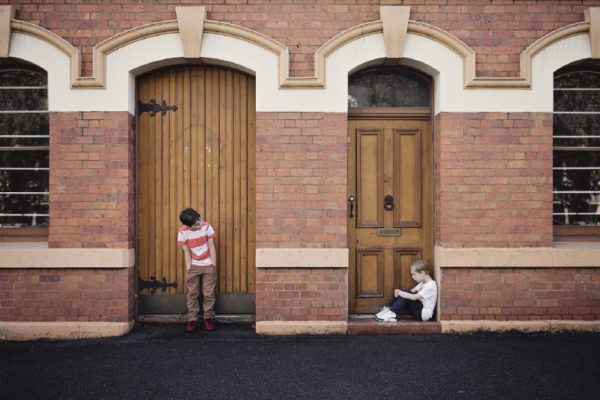 Other than inquiries about the status of our Android app, questions from concerned parents about how to help their children with obsessive-compulsive disorder might be most common in our inbox. So this will be the first in a series of posts highlighting strategies for helping kids with OCD and real perspectives from parents at various stages in this journey.

Today, after some preliminary thoughts, we’ll hear from Chris Baier, producer of UNSTUCK: An OCD Kids Movie, a unique and impactful documentary film that we recently reviewed. Chris is based in New York, where he seems to be always involved in a bunch of creative projects. He’s a copywriter, film producer, and mobile app creator. Find out more about Chris here.

Many parents of children with obsessive-compulsive disorder (OCD) feel stuck. Watching your kids suffer is horrible, so you want to help. But many of the more intuitive strategies for alleviating your child’s suffering– reassuring them, giving them what they want, trying to take away their pain– end up making their OCD symptoms worse.

It can be really difficult to understand– and even more difficult to tolerate– the need to let your child endure pain in service of their long-term well being. Because of the way OCD works, they will never get better if the whole family shapes itself around the child’s anxieties and allows them to rule. Getting better will usually look more like getting worse at first, because learning to tolerate the extreme unpleasantness of OCD is not easy.

There’s always a lot of nuance to someone’s distress, and no single strategy should be applied to every situation. It’s essential that you learn to recognize when your child is suffering in the service of getting better and when they’re just suffering. For example, when we talk about exposure and response prevention (ERP), any exposure that’s done without response prevention will cause unnecessary pain– and will probably launch the family into one of those moments of utter turmoil (you know the ones). Consider an example:

Let’s say a parent reads about exposure online and says to their child, “You’ve been extremely afraid of the school cafeteria because you might get sick there. We can’t live like this anymore. You are going to the cafeteria today and that’s it.” The child, seeing no other option, goes to the cafeteria and becomes extremely anxious. This is an exposure, but it’s not going to do them any good if they just start doing compulsions when they get there. They’re going to be suffering unnecessarily, because there was no plan in place for how the child was going to expose themselves to their anxiety and prevent any compulsive responses that would make habituation to their anxiety (the goal of ERP) impossible. Add to that the fact that they might get bullied for their compulsions by other kids and you’ve got a recipe for even worse situations.

To avoid this sort of misunderstanding it’s best to get professional help whenever possible. Although you’ll naturally want to be the main person helping your kid get better, this can be a setup for disaster because treatment strategies like ERP feel instinctively wrong to a caring parent. It’s also easy to let your frustration boil over when things aren’t getting better– and OCD treatment includes a whole lot of steps back along with the leaps forward.

The ideal scenario is one in which you’re learning along with your child, because the whole family needs to be involved in the treatment process. Once a professional has taken the time to explain the condition and their treatment rationale, you’ll be more prepared to help your child learn how to manage their own symptoms. As a parent, you will be a huge part of their recovery process; but getting a clinician involved will help ensure this journey isn’t marred by frustration, misunderstandings, and misplaced blame.

Now, for a perspective from a real life parent, we’ll hear from Chris Baier. For Chris, obsessive-compulsive disorder isn’t just another topic. He’s the father of Vanessa, who has OCD and starred in UNSTUCK, the documentary film he produced. Many of the insights that fill the documentary clearly arrived through the trial-and-error process of learning how to help Vanessa. He has been kind enough to share some thoughts on that process with us today.

A Lesson Learned Parenting a Child with OCD

When my daughter, Vanessa, started to have strange and odd fears a few years ago, the first thing my wife and I did was try to get help. After she was diagnosed with obsessive-compulsive disorder (OCD), our initial response was to search for a cure. We thought we had the power to fix her.

In this way, we did a lot of things wrong. We accommodated. We participated in OCD rituals. We gave in.

We initially approached OCD like it was a virus and told her to “Get plenty of rest” or “Try to relax.” We thought that distracting her — turning on the TV, letting her sleep in our bed — would help. But treating a mental disorder like a physical one did not work.

What really happened was that we allowed OCD to take control of our lives. OCD didn’t stop there– it started to monopolize our entire family. But as we started to read about OCD, understand symptoms and therapy, and learn about how effective OCD treatment works, we shifted our approach.

We thought that distracting her would help. But treating a mental disorder like a physical one did not work.

We pulled back from accommodating. We made Exposure and Response Prevention (ERP) the most important activity we did with Vanessa every day. More important than homework, playdates, or after-school activities. We treated OCD as an unwelcomed invader.

Slowly we realized that we couldn’t fix or cure anything. We had to give up control because beating OCD was something Vanessa had to do herself. (Yeah, not an easy thing for a parent to accept.) Turns out, our role in all of this was not to be the miracle workers. We were better suited to be her cheerleaders, advocates, teachers and, sometimes, disciplinarians.

This is a role we still play today.

Vanessa is more aware of how OCD affects her and has better tools to fight it. But if a worry floods her mind, we know our role is to help her focus, make a hierarchy of her fears, and encourage her to do exposures so she stays strong.

Turns out, our role in all of this was not to be the miracle workers. We were better suited to be her cheerleaders, advocates, teachers and, sometimes, disciplinarians.

I do not care that it wasn’t a cure. I’m content knowing that I am one of the reasons she was, and is, able to fight.

By the way, if your child is struggling with OCD, you can schedule a free call today with the NOCD clinical team to learn more about how a licensed therapist can help. ERP is most effective when the therapist conducting the treatment has experience with OCD and training in ERP. At NOCD, all therapists specialize in OCD and receive ERP-specific training.

If you’re feeling generous enough to submit your own story, or to suggest a topic for us to write about, please fill out a quick form. And if you’d like to learn about the free NOCD app, which helps you use ERP and other techniques, we invite you to check out our website.

Practical Advice for Parents with OCD

Practical Advice for Parents with OCD