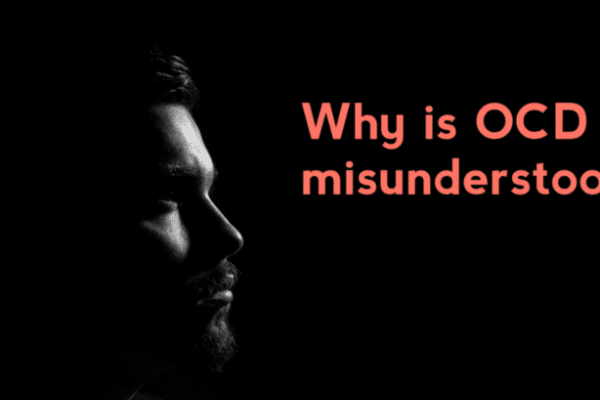 Don’t like marker lines left over on the whiteboard when someone erases it?

Need to have your books in a certain order on your bookshelf?

Never really like to touch a toilet seat in the public restroom?

Then you must be a little OCD, right?

Because so many people say this kind of stuff, it can sometimes be hard to tell what people mean when they say “I have OCD.” Is it a serious statement meant to let you in on their own troubles, or another offhanded attempt to explain away their behaviors in a vaguely self-deprecating way? I once saw a roommate move in with a bunch of cleaning supplies and mentioned that I was glad to be living with someone else who did a bit of cleaning now and then. He responded, “Yeah, well I have OCD.”

OCD is like the Boy Who Cried Wolf of mental health conditions: so many people claim to have it that it has almost lost its original meaning.

Why are OCD jokes offensive?

I still don’t really know if my roommate was serious, or trying to make a joke. Joke isn’t always the right word for people’s remarks about OCD– they’re often more like offhanded statements by a person who doesn’t have OCD using the condition as an excuse for some personality trait or behavior. But I’ll keep calling them jokes anyways for a few reasons:

1. They’re based on a failure to understand OCD
2. They’re usually meant to create a sense of good-natured or chummy connection with the person they’re being told to
3. Some people find them funny, others find them offensive, and still others don’t really find them either funny or offensive

Of course, people make OCD jokes because they don’t really understand it, not because they’re evil. The sad reality is that people rarely take the time to really understanding something unless it affects them or someone they care about. People also make jokes about mood disorders (“Sorry, I’m a little bipolar today”), eating disorders (“She’s looking a little anorexic”), and everything else. But still, OCD is still the subject of a disproportionate number of jokes about mental health conditions. Why are there so many jokes about OCD?

Before we proceed, it might make sense to quickly address why people with OCD might be offended by these jokes and joke-like statements. One problem is that offhanded statements about OCD gradually make people less likely to acknowlege that it’s a serious, chronic condition affecting 1 in 40 adults and 1 in 100 children in the US.

As mentioned above, constant jokes about OCD make it unclear who is really in need of help and who is just messing around. They also make it harder for people to know what OCD really is, meaning they might be less likely to seek help even when they’re really suffering. People who are already in treatment feel even more alone because it seems like other people could never understand how bad they feel. Lastly, offhanded remarks can erode what little cultural understanding there is of OCD, making it more likely that people will make jokes, and so on.

Why are there so many jokes and memes about OCD?

When the average person thinks of OCD, they think of two things: neatness and fear of germs. These depictions aren’t wrong, exactly, because many people with OCD do have these symptoms. But TV shows, movies, and the internet pick up on these compulsions without investigating the obsessions and the intense distress that lead people to use those compulsions. And OCD symptoms are much more varied than these stereotyped images suggest.

The behavior itself might seem kind of funny: okay, there’s someone washing their hands over and over, and we don’t know why. There’s another person who spends the entire day cleaning the same surfaces over and over. But once you know that they’re doing these things because they feel sure something bad will happen if they stop, it becomes less humorous.

For a very short summary, obsessive-compulsive disorder (OCD) makes it very hard for people to tolerate certain forms of what we call intrusive thoughts: those unwanted thoughts that pop into your head throughout the day. People with OCD feel unable to move on from the thought, and might start to ruminate about it. The result of getting stuck on intrusive thoughts is what we call an obsession. Most people have certain “themes” of thought they always get stuck on, like the possibility of getting sick or harming someone else. Because the obsessive stuff causes a lot of distress, people with OCD will often turn to a compulsion in order to reduce that distress.

Sometimes the compulsion is directly related to the obsession, and other times it isn’t. For instance, a person might wash their hands repeatedly (compulsion) because of thoughts about how they must’ve touched contaminated surfaces recently (obsession). In this case, the two are directly related. But they might also wash their hands repeatedly (compulsion) because they’re having thoughts about how they could’ve unknowingly run someone over on their way home from work (obsession) and the hand-washing relieves the distress the obsession causes.

You might say: Okay, I would never make a joke about someone who fears they’re going to die of a serious illness, but what about the people who just like things to be really neat? This is another important point: the type of OCD someone has does not determine the amount of distress they feel. It seems like a pedophilia obsession would be more difficult to tolerate than a religious obsession, but there’s no equation for the amount of distress someone will experience. Besides, as mentioned above, the type of obsession and the particular compulsion often aren’t a clear match. Someone persistently reordering their books might be doing that to avoid how terrified they feel in response to an obsession like: I could go over there and suffocate my child.

With all of this in mind, here are a few of my own theories about why there are so many jokes about OCD:

Maybe the most important takeaway is this: people are always engaging in compulsions in an attempt to reduce their level of distress. Nobody enjoys washing their hands over and over, and nobody wakes up saying “I’m glad to spend another day forcing my family to put stuff back exactly the way they found it.” It’s pretty simple: people with OCD are often in a ton of pain, and making jokes about people in pain is sort of messed up.

That leaves the offhanded remarks about having OCD. If you’re not feeling a crippling amount of anxiety before you do the behavior, and if you haven’t found yourself doing it before, it’s probably untrue that you’re doing it because you’re “a little OCD.”

You can help reduce the negative effect of OCD misconceptions by spreading good information around the internet, and by educating your friends and family when they say something like “I’m just so OCD about my furniture.”

By the way, if you ever hear someone who’s truly struggling with OCD say something like these…

…Then please let us know, because we’ll be very surprised.

If you or someone you know is struggling with OCD, you can schedule a free call today with the NOCD clinical team to learn more about how a licensed therapist can help. At NOCD, all therapists specialize in OCD and receive ERP-specific training. ERP is most effective when the therapist conducting the treatment has experience with OCD and training in ERP.