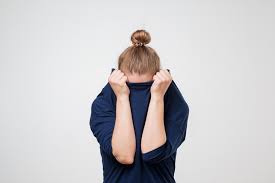 Recovering from OCD allowed me to stop living in shame

It started with images, of naked people having sex. These images disgusted me at my very core. They were out of character, to say the least. The pictures in my mind often surrounded religious figures and then those closest to me.

I was so young. I had no idea what these thoughts were, why they were there, or what I needed to do about them. I was alone, isolated, and ashamed. I wondered what these thoughts and images said about who I was. Did they make me a psychopath? I wasn’t even sure what the word had meant but I knew it was bad. I knew I must be bad if I had these thoughts in my head. It just wasn’t normal, I was sure of this. I saw my life imploding before my eyes. One day I was this carefree and happy child, the next, a frightened shell of my former self.

What if I thought I sexually abused my dog?

I kept it all inside as long as I could. The thought of others knowing my secrets, the things that I thought about was nearly too much to bear. The images turned into thoughts and spread like wildfire on a hot summer day. Before I knew it these thoughts were attached to my beloved dog. One day as my family was getting ready to go on an outing without me a thought washed over me; what if I sexually abused my dog? Then immediately I rejected that thought as I knew I would not want to do that. But it was quickly countered with another equally disturbing thought.  I would be all alone and what if I convinced myself that I had done this? Who would be there to prove that I hadn’t? I panicked.

I told my family that they needed to wait for me to get ready- there was no way I could stay home alone ever again. I thought about this over and over in my mind, that day and the many days that followed. I was disgusting. I was sick. I had begun to internalize these thoughts. I felt that just thinking about these things was just as bad as if I had done them. What would people think of me if they knew that I thought these things?

I started to get creative to exist with whatever this was. I tried to outsmart it. Sometimes this worked but usually, it didn’t, at least not for very long. It was like I could reason my way out of thoughts only briefly before a new spin on them would arise. As if to say “but what about this?” Or “did you think of this?” It felt as if my brain wanted me to hurt. It wanted me to feel pain and suffering. Part of me, my mind, wanted me punished. I often wondered why. Why would part of me want me to be in pain? It just didn’t make sense. This only added to the confusion and made me more convinced that it must be because I was a bad person deep down.

What if I was sexually abused?

Soon the thoughts transitioned to the next level. I hadn’t thought it was possible after the fears about my dog. But I underestimated whatever this thing was. I started to wonder if I had been sexually abused. Perhaps that is why I had such disgusting thoughts running amuck in my brain. I couldn’t remember being abused, but I had heard that people can block traumatic things out. That must be it, that was the answer. I searched my mind endlessly for possible suspects. Was it the creepy neighbor who would pat my butt when he visited? Was the friend of a friend’s older brother who seemed to be around when we visited? Could it of been a relative? My mind went about the investigation for days and months, to no avail. There was no “real” memory of this. I couldn’t rest until I told someone. I needed reassurance from someone that this had not happened to me. If it had happened to me I felt that it must make me dirty and that something was wrong with me. Once I talked to someone about it, I felt a relief off my chest. It felt so freeing to have someone tell me that this was just a thought and that nothing had happened to me. This fear began to fade into the background.

Other fears would take hold from time to time, varying in degrees to which they tormented me. Any sexual thoughts would throw me into an absolute terrorized state. My stomach would be filled with sickness, my body would tingle, and anxiety would course through me. It was the worst feeling I had ever experienced.

As I entered my teenage years these thoughts only naturally would evolve into more “adult” themes. As embarrassing as this is to share, I want to help anyone who may also be struggling and who thinks they are all alone. You are not alone and you are not “bad”. At one point I was sure that if this was my life and how it would be, I didn’t want to be part of it. I didn’t want to suffer any longer. I didn’t know what was wrong.

As most young people do, I masturbated. I masturbated to normal teenage stuff I suppose. I would fantasize about cute guys that I saw on television or in movies. I would come up with this whole story about how they were my boyfriend or whatnot. This was all fine and normal- until it wasn’t. It was as if one day a switch flipped in my brain. This was now awful, I was a shameful, terrible person for having engaged in that behavior. Familiar feelings of guilt and horror flooded me. I needed to know that I was normal and that this didn’t make me bad. I tried to confess to an adult, and they reassured me it was okay- but I still couldn’t feel better. Then it got even weirder- hard to imagine I know. But then I tied that behavior to clothes, to objects.

Before I knew it almost everything had become “dirty” or contaminated. I couldn’t wear almost every outfit I owned. At that time I had a lot of really nice outfits and was used to dressing stylishly. Eventually, I became resigned to only sweats and a tee shirt.

I could not get everything clean enough. Someone else in my home may have touched this or that and then that. It was an endless and exhausting process that lasted years. The amount of stress that I felt cannot even be put into words. I was full of shame at my core. I had no one I could tell about this. I knew how strange it all was, I knew logically that it didn’t make sense and yet I FELT so deeply that if I could just get it clean enough that it would all go away. My life wasn’t my own. To say I missed out on a lot of things would be a gross understatement.

At some point in this madness, I gave up cleaning everything. I decided that it was too much. After years of trying, I now knew it was over. Everything would just be dirty. It would have my shame and my disgust on it. I couldn’t undo this. I decided that the one thing I could control was my face. I went to great efforts to keep it clean, nothing else on my body mattered. I was using soaps and chemicals to clean my mouth and face. One time, a loved one caught me even using Comet cleanser which is very abrasive. A crazy thing about this was that I could no longer use my toothbrush, my toothpaste, or really anything, even certain soaps had become “dirty”. So here I was, not brushing my teeth, rarely showering, all in an attempt to be clean.

I wasn’t eating much. I wasn’t functioning. I had been in high school and had dropped out due to anxiety. I would have to ask to leave class several times to go to the bathroom and wash my mouth with soap. I was falling apart from the inside out. People closest to me knew I struggled but didn’t know how to help. They tried but they couldn’t. They had no idea the extent of it all. There were times when these struggles would quiet down and times when they would become so loud that it was nearly unbearable.

It wouldn’t be until I was a young adult that things came to a head. Thoughts about convincing myself of having done something awful spread into every possible scenario imaginable. What if I lost my mind and made myself believe something? Could that happen? I had heard that people sometimes confess to crimes they didn’t commit. What if that happened to me? I began to go to extremes to not be alone. I needed to always have someone else with me just in case I needed verification that I had not engaged in anything illegal or inappropriate. The thoughts engulfed me. The worst of these surrounded children. I had always wanted children and to be a mother. This was my dream.

When the thoughts initially appeared about the possibility of making myself believe I had done something wrong, the idea of what if I thought I had molested a child was by far the most haunting. I wanted to die. I prayed to die. I would rather be dead than hurt anyone.

I finally sought out help. I was at a grocery store and almost passed out. I was exhausted and not eating. My mouth had burn marks all around it from the chemicals I had used to wash it. I was not caring for myself. I made a call to a mental health agency. I was able to finally be seen. I had tried so many times in the past but to no avail. I could never get to the place where I shared openly what I was going through. The shame and embarrassment were just too much. This time was different. This time I knew it was life or death. After months of meeting with a therapist who knew about Obsessive Compulsive Disorder (OCD) and who had diagnosed me with this, I finally shared my most tightly held fears. The response I received was unexpected, to say the least.

Through the use of Exposure and Response Prevention (ERP) therapy and Cognitive Behavioral Therapy (CBT), I was able to start the journey of recovery. The compassion and the education that was given me helped save my life. I am forever grateful to this therapist who helped me at my darkest hour.

It was difficult and intense work, to be certain. Years of therapy and medication management strengthened my resolve. I would fight back at the OCD. I would no longer live complacently with it. I had to stop giving in to the compulsions, to stop washing things that I thought were dirty. Before long the burns on my face healed. I started taking care of myself again. I could brush my teeth and eat what I wanted. I felt a freedom that is hard to imagine. I was enjoying life again. I no longer wished for death. I wanted to live life fully. So I did and I continue to. You can too.