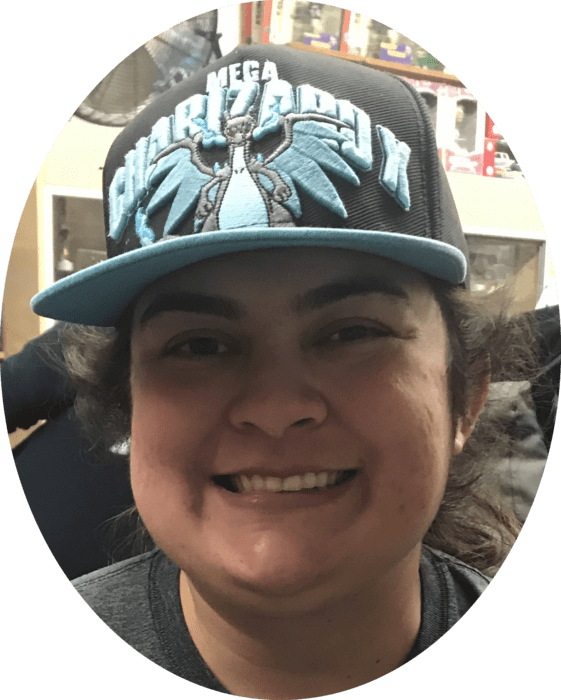 Trusting Even When I Am Afraid

From a very early age, I knew something was different about myself. There was this part of me that was gifted, and I impressed my teachers, parents, and peers with above-average intelligence and analytical skills. I loved to learn. My favorite subject was math. I loved math so much that one summer I spent eight weeks immersed in a college calculus course. People thought I was odd because of my love of math, but I found it enjoyable, and to this day I say I would rather do calculus than chores!

With this level of functioning came perfectionism. I noticed this from a very early age. In the third grade, my art skills had advanced pretty considerably, and I began drawing Pokémon characters that looked nearly identical to the ones I would see in my books.

By age 8, I would rarely, however, finish my drawings. I never felt that they were good enough, even with constant reassurance from others that my drawings were amazing given my age. Still, it never felt “just right”. I would spend countless hours drawing and erasing, and it became so bad that the paper would rip under the weight of the eraser. I would become frustrated with myself and quit. I couldn’t stand the idea of it not being the way I thought it should be. It needed to be perfect. In early childhood, this unhealthy perfectionism manifested in other ways as well. Most notable was that I could not test into the gifted program even though I had above-average intelligence. The reason, as I later discovered: I never felt sure enough about my test answers, and I changed them multiple times due to constant self-doubt.

As my brain began to develop more, I started having more intrusive thoughts. My first ones were terrifying. My mind began tormenting me day and night with obscenities, blasphemies, and awful sexual images. I would almost “hear” the F-word in my head repeatedly, disturbing me constantly. I had never been a person who used foul language and didn’t have any desire to. In addition, even though I didn’t consider myself religious at this time, I began to have obsessions surrounding religion. By the age of 13, I considered myself agnostic and avoided churches for many years. I avoided anything that reminded me of religion, and to cope, I came up with phrases in my head that I felt I needed to say to ward off these troublesome thoughts.

Fear of judgment and being labeled “crazy” kept me from sharing these dark thoughts and feelings, even with my mother. I managed to get through these difficult teenage years and by some miracle was able to go through high school, mostly unscathed. At least that is what I thought at the time. In my senior year of high school, teachers chose me as “Student of the Year” and classmates voted me as “Most Likely to Cure Cancer”. I was taking honors and AP classes and participating in seemingly endless extracurricular activities. Meanwhile, the obscenities plagued my mind and became louder and louder. I tried to ignore them and push them away, and  I came up with creative ways to rid myself of them by saying certain phrases to myself.

The thoughts would always come back. Furthermore, the perfectionism that had been with me since being a young child was still at work in my life.

I spent an excessive amount of time doing school work, striving to be the best, to be “perfect”. I made excuses to work on math and to go ahead in the textbook. The idea of a black-and-white world drew me in. Math felt straightforward. It was comfortable to have a correct answer because there was no guesswork involved. It was straightforward and I felt at ease. Other subjects did not afford me this comfort. There was far too much uncertainty, too many possibilities. This would lead to an effort to always find the best answers, and to always go over and above the assignments. For English class, I would spend countless hours at home rewriting and editing papers, and it was agonizing. Many evenings were spent in tears. My mother would try to help me but she too was stressed and overwhelmed by what I was experiencing. She didn’t know how to help.

I was exhausted from expending so much mental energy every single day. My brain rarely, if ever rested. I took a lot of my frustration out at home, on the one person I could trust to never judge me, my mom.

By the start of my senior year of high school, my still-undiagnosed OCD and accompanying depression became too much for me to bear. I felt unchallenged in school, and I became bored. This perfect storm catapulted me into a terrifying downward spiral of deep despair and unceasing anxiety. Amid this turmoil, I became a Christian, which happened suddenly, unexpectedly, and dramatically. Internally, I began to experience what felt like a supernatural peace, even if it was just a sliver of peace. Anything felt better to me than my depressive, looping hell, even if it was Christianity. But my OCD remained undiagnosed and active, and I began to act in extreme ways regarding my newfound faith.

Early on during my first semester of college, I stepped into Counseling And Psychological Services, CAPS. It was there that a professional first suggested to me that I had this mental health condition called OCD. Immediately, I recognized some of the symptoms in myself, like the distressing religious thoughts. But for the most part, I dismissed the diagnosis, didn’t seek further professional help, and continued to live my life as best as I knew. My symptoms were, in fact, very full-blown. Looking back at that time, I probably would have qualified for admission into a residential psychiatric facility. But I still “functioned”. I maintained a good college GPA, was active in my new church, ate relatively well, and exercised regularly.

Loss of my mother

It wasn’t until my mother died of cancer in 2015 I realized just how badly I needed help. Within a few months, I experienced a complete psychological collapse. My fiercest advocate, my best friend, had died of this terrible illness, and I was only 22, with a myriad of psychiatric issues. I have always been good with words, but when I try to articulate the pain I felt, I come to the limits of language. My mother was my rock, the one who felt safest to me, and now she was gone.

It became apparent I needed professional help, and thank God, my mom left me with something. So began the long, arduous journey of therapy. At this stage, I was nearly catatonic, and when I first stepped into the office of the therapist who would work with me for several years, I was in such deep psychological pain that we didn’t know where to begin. Consequently, we started with the most pressing issue, the grief of losing my mother.

Over time, it became evident that my grief was complicated due to my other diagnoses that never received proper treatment. EMDR, which is a popular form of therapy used to treat PTSD, helped me process trauma, but it could not help me with my constant looping or depression. Eventually, my therapist and I hit a brick wall in my treatment.

I searched long and hard for this “specialized help.” It was not handed to me on a silver platter. Thankfully, I have always had a knack for research, and in this instance, it served me well. In one of my public health classes, we were asked to read a memoir written by someone with a severe mental illness. Naturally, I chose the book written by a person with OCD. I remembered the “suggestion” of an OCD diagnosis made to me at age 18.

This book, called Rewind, Replay, Repeat: A Memoir of Obsessive-Compulsive Disorder, was a godsend. It changed my life. In it, San Francisco news anchor Jeff Bell recounts his excruciating battle with debilitating OCD. On a surface level, his obsessive-compulsive fears looked very different from mine. His OCD revolved around harm, whereas mine revolved almost exclusively around perfectionism, religion, and morality. But the thought process underlying the disorder was the same: an insidious thought or “what if” question seeking to demand your immediate attention. Followed by debilitating anxiety and uncertainty that seems only to go away when you do this, often, nonsensical act. Only to lead to even more fear and uncertainty, with the original thought popping up again and again. This cycle keeps you trapped in this looping hell of incessant doubt.

This had been my entire life. I knew the disorder had a name at age 18, but I did not know it had an effective treatment until age 23.

It explained why I never finished my drawings. It explained why it took years for me to step into a church. And it explained why, when I did come to genuine faith, I compulsively avoided anything and everything having to do with my former irreligious life. My avoidances included subjects I loved, hobbies I once pursued, places I attended as a non-Christian, and even people I cared about. Because I was terrified of my mind and what it would throw at me. I always cared about excellence, morality, and truth, because that is the core of who I am. But this disorder called OCD hijacked my sense of morality and turned it into hyper-morality. It seized my love of excellence and turned it into an impossible pursuit of perfection.

Today I am in recovery

Well, glory be to God, I am done living with debilitating OCD. Since I lost my mother seven years ago, I have been through two residential treatment centers, two partial hospitalization programs, one intensive outpatient program, and countless other traditional outpatient therapy sessions, including NOCD therapy. When I first entered intensive treatment for OCD, my symptoms were so severe that nowhere in the entire state of Arizona could treat me. I had to travel to Wisconsin, alone, to have any chance of getting better. I have been in and out of several treatment centers working on getting better.

This year, even with a new diagnosis of bipolar disorder, my recovery has taken off, especially as I have gone public about my struggles. Today, even as I am still working hard in my recovery, I have found an incredibly supportive partner who cares for me, and my friends and family love and support me. What has been most empowering to me is knowing I am not alone in my diagnosis. I want you to know that no matter how bleak your circumstances may seem on the outside, you can get better, and I am living proof.