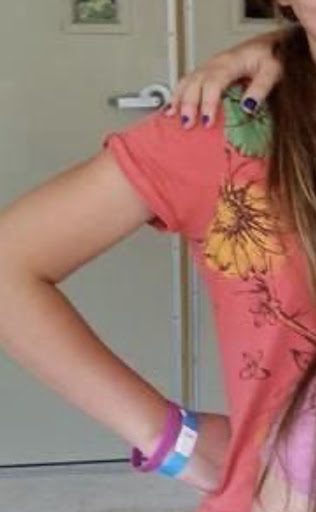 Religion, Harm and Superstitions: My Descent into OCD

I am, by all accounts, an avid dog lover and all around animal lover. I like hiking with my dogs and enjoying nature. I can be found biking by the beach in my free time, as this is one of my most favorite things to do. I love to watch good period dramas, especially those involving the 1700 and 1800’s.  I like learning. I am interested in mental health and psychology; reading anything about this interests me. I find that reading anything similar to my own experiences is validating. Advocating for mental health is important, which is why I am choosing to share my own personal struggles.

Life before OCD was a much simpler time. This was a time when I was able to live my life with ease. Looking back on it, it was such a privilege, I didn’t have to struggle. I didn’t have to overthink or stress.

The first 10 years of my life were calm and smooth; I don’t recall panicking or thinking as much as I now do. Even though I was somewhat of a nervous child, I would not say that I was necessarily overly anxious— that is, until I was. I was 11 years old when my family moved for the first time due to financial reasons. I left the only home I had ever known. I was also learning more about the world in which I lived thanks to technology and being introduced to the internet. Not only was I starting a new school and meeting new people, but we also started a new church. This proved to play an integral part in my own struggles with what I would later come to know as OCD.

There began to form a perfect storm of worries. The new house had gas heating. Having recently seen on a television show the dangers of carbon monoxide poisoning, I became hyper-aware of the safety of my loved ones. I began to have certain prayers and phrases I would say in my mind to help myself feel like I was keeping everyone in my family safe. I felt that I had to “manifest” certain feelings of safety. It only intensified from there. The prayers became more and more complex and time-consuming. They would provide relief temporarily, only to return again with the next new thought.

The first time I knew something was really wrong was after my parents divorced. We stopped going to church after this. My dad moved into a different house with roommates. I felt the area was unsafe and worried. My first night staying there, I was unable to sleep. All night I felt this intense urge to knock on wood 3 times. I believed that would keep the danger at bay. In particular, I worried about our home being broken into. In my mind, it was my responsibility to keep everyone in my family safe. I didn’t sleep at all that night. This would be the beginning of many sleepless nights for me.

Religious thoughts quickly shifted to thoughts of harm coming to loved ones. I began connecting intrusive thoughts with people. For example, if someone gave me an object and I was to get rid of that object, I became convinced that something bad would happen to that person. I began wearing charm bracelets that people had given me to prevent bad things from happening, at least that is what I felt. The church we had attended had many devout Catholics, some of whom had shared with me the meaning of wearing a scapular. They believed that wearing one could get you instantly into Heaven if something bad were to happen. This deeply influenced my OCD to latch on to the idea that wearing something could somehow ward off evil things from happening. Wearing these charm bracelets would become a lifelong compulsion.  I felt like I was taught from a young age to fear. Even today, I struggle with the thought that I may offend God or that he will be angry at me.

Even after my family had stopped attending the church, these thoughts and fears would still creep into my life. As these fears became less, a new one emerged. I was introduced to the idea of superstitions. When we would go by a cemetery I would need to hold my breath or someone would die. I feared car accidents.

Anything that my OCD told me I could do to prevent harm from coming to my loved ones, I often would do, even when it made no logical sense. I would knock on wood to prevent bad things from happening. I considered 3 to be a “good” number and 6 to be a “bad” one. I had to knock on the wood 3 times, but I never was quite certain if I had done it right or enough so this pattern would continue, sometimes for hours on end. I couldn’t step on cracks on the sidewalk. All of the things that people hear about in regards to being superstitious I was doing, but in excess. OCD often works in excess.

In my 20’s I began to notice that I was always trying to do things “just right,” I wanted to be efficient and successful. Though many would see this as a positive trait, I knew it had become something more, something that caused me a great deal of distress. I was constantly feeling compelled to “fix” things in my environment. I needed things to be a certain way, I needed symmetry.

I began seeing a therapist for Generalized Anxiety Disorder (GAD). I tried to tell them that I thought it was something more, but it was apparent that they were convinced it was GAD. I felt that this misdiagnosis led me down the path to not getting the most beneficial treatment that I needed.

Getting the right diagnosis and treatment

It wasn’t until Covid hit and we were in a full-blown pandemic that I recognized that I needed more help than what I was receiving. I was able to do a quick search online and NOCD popped up. Upon further research, I scheduled an appointment. To my surprise, I was able to be seen immediately and received a proper diagnosis of OCD. My therapist and I immediately got to work. Within 6-10 weeks of treatment, my symptoms improved tremendously. Taking the initial step to start treatment was difficult. I had to admit that what I was doing was not making sense. I had to say out loud things that I had held inside for a very long time.

It was a hard adjustment going from traditional therapy to Exposure and Response Prevention (ERP) treatment. I was used to being reassured in sessions about my thoughts and compulsions. In ERP I learned that this ultimately only led to a worsening of my OCD symptoms. My therapist would no longer give the temporary relief of reassurance, and instead, I had to learn to sit with the uncertainty and anxiety of whatever intrusive thoughts I was having, while not engaging in any compulsions. Initially this was so incredibly hard to do, but it worked. I recognized the more I allowed the uncertainty to be present and went about my life, the less the thoughts showed up and when they did I was equipped to tolerate any emotions that came with them.

The most helpful thing on my journey has been learning to challenge the OCD head on. I could no longer back out. When I started ERP I had a therapist that kept me accountable. I had to do the homework in between sessions. I had to be dedicated. There was no turning back.

The hardest thing I decided to do in ERP was to take off the charm bracelets. These were bracelets I had worn for many years, and I believed to a certain extent that they protected me and my loved ones from harm. Getting the bracelets off of me was no easy feat. Working alongside my therapist, we took several sessions to begin this process. Initially I removed one of them and sat with it in front of me. I let all of the emotions flood my mind and I resisted any urges to do anything to make myself feel better at that moment. I remember feeling sick to my stomach and so afraid. I wasn’t even sure what I was afraid of at this point.

Instead, I let myself feel uncomfortable and eventually it passed on its own. I was able to keep the bracelet off for a whole week. It felt liberating. I decided that I wanted to make it more permanent and I cut it in half and threw it away. I have never felt so alive and so free. Shortly after I was able to get rid of another, until I had no more bracelets that I “had” to wear. I had spent so much time worrying about what might happen to a loved one if I took those bracelets off. For the first time ever, I was able to break the connection between an object and my thoughts.

When I look back on my experiences I wish I had sought help sooner. I wish I had known that I was not alone. There are others who have the same types of thoughts. When you keep it all bottled up inside of you, you miss out on realizing that there is hope, there is help. You do not have to let OCD control you, there is treatment. Life can be easier.