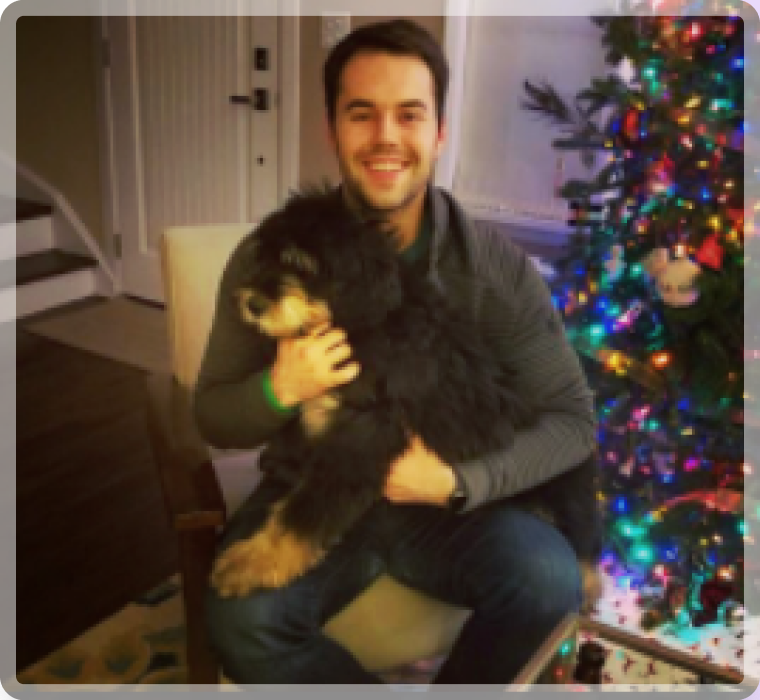 My Experience with OCD

Hi Stephen! Would you be able to introduce and share a bit about yourself?

Sure thing. My name is Stephen Smith, and I am the Cofounder and CEO of NOCD. In my free time, I enjoy being with my family and friends. My family includes my wife Kara, my boys Aiden and Theo, as well as my dogs Cola and Griffin. I also enjoy spending time with my parents and siblings as much as possible. When not with family, I enjoy spending time with others on the NOCD team, my friends from high school and college, working out, eating breakfast or ice cream at any hour of the day, reading, and thinking about ways to improve NOCD. I’m really looking forward to seeing what the company can accomplish this year for the OCD community.

What was life like before OCD as much as you can remember?

Before my journey with OCD began at 20 years old, I never really experienced any major concerns. Growing up, as the oldest boy of 5 children, I had lots of responsibility to help my family. My parents encouraged me to work hard, support my siblings, and become well-rounded in school, sports, music and any other activities that I tried. They were the perfect balance of strict and supportive.

By middle school, my life became more complex. I was a “late bloomer,” which made me a little awkward. Expectations were higher— school became more challenging, sports became more competitive, and piano was time-consuming. From seventh grade through sophomore year of high school, I was bullied pretty much non-stop, since I was successful enough to compete in sports and in the classroom, but I was socially and physically a little less mature than my peers. I felt significantly depressed during this time period, like most who were bullied as much as me, but that all changed as soon as I started boxing. The sport gave me discipline and confidence. Coupled with an 8 inch growth spurt my sophomore year of high school, it also allowed me to taste what overcoming a real challenge was like. I started boxing competitively in Chicago and succeeded.

At that point, I began to overcome the dark junior high and early high school years, make some really close friends at a new school, and achieve both in the classroom and on the football field.

The success experienced my Sophomore year through my Senior year in high school led me to playing football in college at a small university in Texas. I chose the school because of the scholarships they offered me, the strength of their Chinese major, and the top-notch reputation of their football program.

Everything went to plan to start college. Academically, school was rigorous, but it offered me the space needed to learn more autonomously. Moving to Texas was a perfect fit, due to the weather and food. Football was a blast, not only because of the amount of playing time that I received early, but also because of the close friendships I formed with other players on the team.

There were ups and downs in retrospect, especially in regards to when I became the starting quarterback of the school, but they didn’t cripple me like OCD.

OCD differs from person to person – how did yours manifest? Do you recall when OCD first started and what you were doing then?

My OCD  manifested in a variety of subtypes. I first started having taboo sexual intrusive thoughts, coupled with lots of mental reassurance and checking. Then, the fears morphed into relationship OCD, and I mainly compulsively Google-searched and asked for reassurance in an attempt to make my obsessions stop. After struggling with relationship OCD, my obsessions morphed again into other violent, sexual, religious, and existential themes that I’m still too shameful to talk about publicly. 80% of my compulsions were mental, which some might call “Pure O.”

Also, I do recall how my OCD first started. My journey with OCD began when I was 20 years old, and it turned my world upside-down. As highlighted above, prior to the onset of my symptoms, I was a successful student athlete at a small Texas university, majoring in Chinese and playing quarterback on the football team. I was fortunate enough to have great grades, enjoy a nice social life, and receive awards for my play on the field.

Then, one day while home on summer vacation in the Chicagoland area, I randomly started having a taboo sexual intrusive thought that completely contradicted my core values and character. Unlike thoughts that would naturally pass through my head, this one stuck, since I couldn’t disprove my horrified feelings about it with 100% certainty. A part of me asked, “what if you are having this fear because it means something about you.”

After a few weeks of being crippled by the fear, I sought care from an in-network Chicago psychologist, who misdiagnosed me with generalized anxiety disorder. His recommended treatment plan: Snap a rubber band on my wrist whenever my sexual intrusive fear occurred. The misguided advice only made my symptoms worse.

I ultimately saw four more providers, and each one failed to recognize I had OCD. During this process, my OCD morphed a handful of times. In the end, my health plan paid providers who misdiagnosed and mistreated me tens of thousands of dollars for therapy that was both ineffective AND harmful, while my mental health continued to decline. Severe depression soon followed the constant mistreatment, pushing me to pause my school and football career.

What were your OCD themes / how did they change over time?

I shared my themes above. Even as the CEO of NOCD, I still don’t feel comfortable sharing all of my themes, especially more of the taboo ones, to this day. These are the fears that cripple me the most. If you are going through the same experience, I can relate. This is also why OCD is so misunderstood. People are usually too embarrassed to talk about what’s really wrong with them unless they have complete trust. It’s hard to build trust in a transactional healthcare setting.

How did you ultimately recognize it was OCD that you had? Was it a long process and what steps led you there?

I recognized that I had OCD when I began desperately searching my very specific obsessions into Google, in order to try to make them stop. Never would I ever have imagined that my experience was defined by a common subtype of OCD, given how little is known about OCD. Once I searched my fears in Google and learned they could be OCD, I began spending my time compulsively learning about OCD. There were certain articles that I would read and reread hundreds of times to just ensure that my experience was still OCD. The more I researched OCD though, the more I realized that I was experiencing the condition.

What’s the most useful help you have received in dealing with your OCD?

The most useful help I received in dealing with OCD first was content created by Chrissie Hodges. At the time, she had a podcast that specifically talked candidly about different subtypes of OCD. That’s how I first started realizing I wasn’t alone. Once I felt understood and less lonely, I became inspired to start read online forums and start treatment. Because I had been failed by so many therapists who misdiagnosed and mistreated me in the past (I was misdiagnosed for anxiety and depression about 6 different times), I I didn’t feel comfortable seeing another therapist right away. Instead, I read a self help book called Stop Obsessing  by Dr. Edna Foa. It completely educated me about the importance of doing Exposure Response Prevention (ERP) therapy, and it also inspired me to see a licensed therapist that specializes in it. Finally, after waiting on a waitlist for some time, a family friend helped me finance treatment and I eventually got to an ERP Therapist. She completely changed my life. What people don’t understand is that ERP is 20% doing exposures and 80% learning how to do response prevention, the practice of accepting uncertainty. She taught me how to respond to my OCD fears and accept uncertainty.

To summarize my experience, the most helpful thing for me was to see a licensed therapist that specialized in ERP, but it was a journey to get there.

How would you describe OCD in a few sentences for those who don’t live with OCD?

OCD is invisible imprisonment, and the person living with it is the only person with a key out. That’s what makes it torturous. You can beg for help from every direction but the only person who can actually help you is you. That’s why seeking treatment from a specialist is so important. An OCD specialist will teach you how to “find and use the key out of OCD jail” and live your life again, by helping you practice radical acceptance of the uncertainty behind your OCD fears. The skills carry over later in life, while OCD relapses.

What words of advice do you have for those who are just now where you were when your OCD began?

Focus on what’s in your control. OCD thoughts aren’t in your control, but your response to them is completely.  Further, you also are the one who can determine what to do for treatment. Find a great therapist who specializes in ERP and learn how to respond to OCD fears by accepting uncertainty.

The OCD Stories podcast is fantastic. I would highly recommend checking it out.

You can learn more about Stephen in his OCD Stories podcast here.