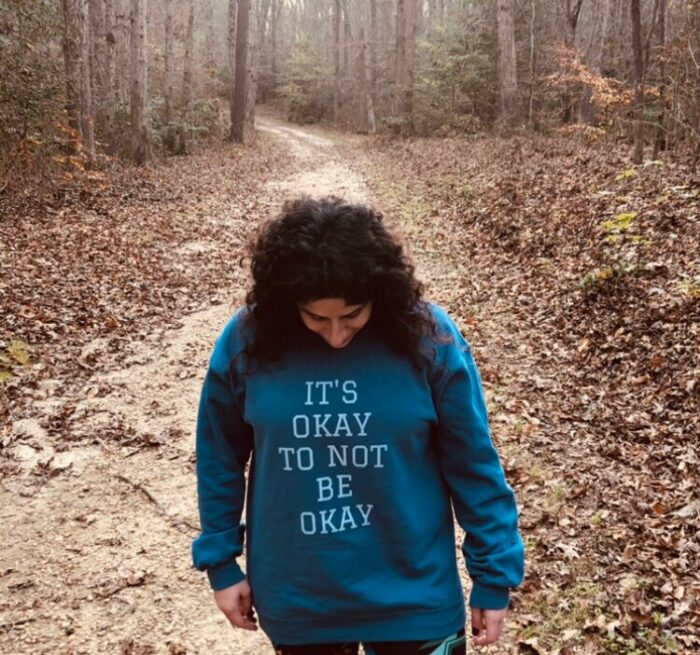 Learning to live with OCD

Hi Mollie! How would you describe yourself?

I love to spend time outside; hiking, swimming, and traveling are some of my favorite pastimes. I also enjoy reading and love the TV show Friends! In a few short months, I will be welcoming identical twin girls into this world, and so most of my time and energy lately has been spent caring for myself and preparing for this exciting new transition into motherhood.

I first started noticing OCD and anxiety symptoms at a very early age, although I had no idea at the time that that’s what I was experiencing. I don’t remember a life before my OCD showed up, as some of my earliest memories involve (what I now know are) obsessions and compulsions. I remember being early school-age and feeling different from everyone else around me.

How did your OCD first manifest? Do you recall when OCD first started and what you were doing then?

There wasn’t a specific moment that I remember being hit with intrusive thoughts. It was more gradual and over time that I noticed the thought becoming scarier and more intense. As a child, I experienced a lot of counting compulsions – certain letters in the words I was saying, how many steps I was taking, the seconds in each minute. I dealt with a lot of compulsive list-making, especially in relation to things that were insignificant; I didn’t know at the time, but these compulsions made me feel less worried about the things going on around me, at least in the short-term. But just like with any other type of OCD, those fears always came back. My anxiety and OCD really distracted me from living my life because I spent so much time stuck in my head and giving in to my compulsions.

Has your interior world (what was going on in your brain) ever collided with your exterior world? How so?

I would often get called out for being distracted or not paying attention in conversations. I always struggled in school due to living in a state of such high anxiety and because my mental compulsions didn’t allow me to pay attention to what was actually going on in front of me. Instead of focusing on learning and being a kid, I was caught up in counting and making lists and reviewing the future. I also had a really low self esteem due to feeling so different, and this impacted my ability to connect with others.

What were your OCD themes, and how did they change over time?

As I grew and matured, so did my OCD themes. I began experiencing sexually intrusive thoughts as well as violent/harm-based thoughts, and I want to be clear that these thoughts were absolutely not what I wanted to be thinking about. I also experienced Just Right OCD (having to close the door a certain number of times, step in a way until it felt “right”, tap things a specific number of times, etc.) and Moral Scrupulosity OCD (which is where my OCD latches onto being a “good” person, but it would always revolve around obscure things that don’t actually make sense). Once I found out that I was pregnant and expecting twins, my anxiety and OCD themes changed again, now mainly surrounding keeping my babies safe – including checking compulsions, reassurance-seeking, and a lot of rumination.

How did you ultimately recognize it was OCD that you had?

For more than 20 years, I had no idea that what I was experiencing was OCD. I always felt like I was different from everyone around me because they seemed to be able to move through life so easily. School and making friends seemed to be seamless for others, and I constantly felt like there was something wrong with me. I can vividly remember, in 2nd grade, writing in my diary one day: “I want a new brain because mine is broken”. When I went away to college, I felt incredibly alone; I isolated myself to my dorm room, instead of going to events or parties. After suffering in silence for so long, I finally decided to meet with a counselor, and I ended up connecting with a couple different talk therapists over the next few years. Although these therapists were helpful in the sense that I was able to vent and talk about some of my stressors, I never truly got to the root of my anxiety – Obsessive Compulsive Disorder – and I always ended up leaving their office and engaging right away with my compulsions again – simply because I didn’t know any better! It felt like those compulsions were keeping me safe, when in reality they were keeping me stuck. After another few years of suffering and not knowing what was really going on, I started to open up about my experiences on social media (on instagram, of all places). In doing so, I began to connect with others around the world who shared their stories as well, and I began to recognize so many similarities in what they described. I heard of the term OCD (and not in the stereotyped ways that the media portrays it), and it was like a lightbulb moment for me because the ways that others were describing how their brains worked were eerily similar to what I had gone through, and it all started to make sense. It answered a lot of questions I didn’t even know I had.

What’s the most useful help you have received in dealing with your OCD?

After learning more about OCD, I began to piece together more from my childhood. One of my new instagram friends told me about this therapy platform called NOCD, and I reached out to schedule an appointment. In my first session, I received a clinical diagnosis of having Obsessive Compulsive Disorder, and even more things started to make sense. ERP (Exposure and Response Prevention) therapy truly gave me my life back, and working with an OCD specialist who also taught me about mindfulness has been incredibly beneficial for my recovery journey. Connecting with others who also live with anxiety and OCD has been another important tool in making me feel less alone and more understood.

What would have been helpful for you as you started the recovery journey?

Understanding that the media’s representation of OCD (as someone who loves to clean/organize or somebody’s quirky personality trait) is completely inaccurate and that in actuality OCD involves distressing thoughts or images (obsessions) as well as behaviors or actions to lower the anxiety (compulsions). I also would have loved to have been taught more about mental health in school, especially elementary school, so that there would be greater awareness surrounding mental illnesses.

Where in the recovery process do you see yourself?

I consider OCD recovery to be a lifelong journey. It is not an overnight fix by any means, but living with OCD – alongside the proper tools in therapy and/or potential medications – can become more manageable. I truly believe that I will always be in recovery, as I am continuously learning more about myself and more skills that I can implement on a daily basis.

Are there any groups you enjoy representing or advocating for?

Yes! I identify as a member of the LGBTQ+ community and love to advocate for basic human rights. I have also been diagnosed with BDD (Body Dysmorphic Disorder) and Social Anxiety Disorder, and I consider myself a constant work in progress.

What words of advice do you have for those who are just now where you were when your OCD began?

First and foremost, you are not alone! I don’t say this as a cliche – there truly is an entire world of others whose experiences mirror yours and who understand what you’re going through. As well, it is imperative to know that there is nothing wrong with you. You are not broken, and you are not a monster; simply put, you are somebody who is living with a misunderstood mental illness