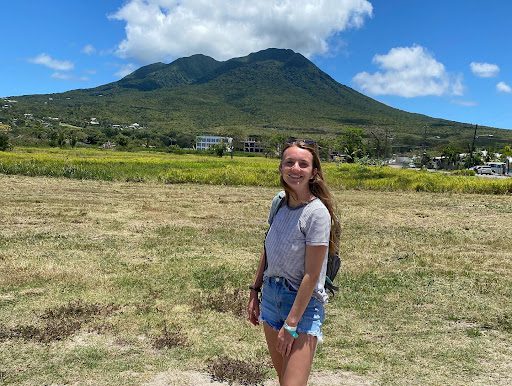 It Was More Than A Phobia

Before being diagnosed with OCD, I really can’t remember a time when I didn’t experience anxiety, I just didn’t know that it had a name. There were times when it wasn’t as strong in my life. I was more free. I was carefree and social by nature. Since I was always told that I had anxiety, that’s what I attributed those times that I wasn’t feeling as free to be.

My anxiety caused me to act in ways that others didn’t. Around 4th grade, while I was in elementary school, I would step on certain tile squares in the hallway. My fear was that I would step on one I was not “supposed” to and something bad would happen. I worried I would miss the bus, or my mom would pick me up late, or that maybe I would fail a test.

What if I throw up?

OCD really worsened in 6th grade when I was on a field trip and a girl in my class threw up all over the place. It was horrific. This incident triggered something inside me that is hard to explain. I became obsessed with the idea of throwing up. If someone even mentioned not feeling good, I would avoid them. I started to constantly check my body for any signs of illness. I needed to know that I was okay and that I was not about to throw up. This became a constant fear throughout my life from this experience on; sometimes it would disappear for a while, only to return again later.

In 6th grade my parents also went through a divorce. I think the stress of that combined with the field trip incident really impacted me. Thankfully, my parents were able to get me into treatment. I began working with a “talk therapist” on what was identified as a phobia of throwing up. I was managing it, though it never fully went away. I was able to get through high school with little problems related to this.

Then came college. I was preparing to move out on my own—a big adjustment for anyone. I was in and out of various “talk therapists” and they would say things like “you’re obsessing,” but they never identified my struggles as Obsessive Compulsive Disorder (OCD).

Finally finding out it has a name

By this point I had been living in a near constant state of fear. My life was constricting. Bit by bit I was losing the freedom of my own choices. Being a social person by nature, I used to enjoy going out and being around people. Now I was trapped inside a prison of my own mind. I stayed home for fear of throwing up in public. I avoided anything and everything that could possibly lead to me feeling sick. It was exhausting. I was constantly trying to be healthy and to stay away from those who were not. To me, the worst possible thing that could happen would be to throw up.

Then it happened one day, the inevitable. I threw up. I had gotten food poisoning, despite all of my best efforts to be cautious and avoid getting sick. The act of this taking place forced me to face this fear that I had carried for so long. I survived it. It was not as bad as I had always feared it would be. I was able to get through it. This acknowledgement alone was a crucial turning point in my life.

As I now have learned throughout the years, OCD likes to have your full attention. When I finally faced the fear of throwing up, more fears began to pop up. It was as if it couldn’t be satisfied unless I was miserable. It began to act as a see-saw in my life; going back and forth between what I later learned was harm OCD themes and health themes. I began to engage in compulsions in a feeble attempt to ward off the thoughts that bothered me to my core. I began obsessing about vitamins and what I put into my body, staying healthy. Thoughts of hurting myself would come into my mind; I didn’t want to hurt myself and the thoughts scared me. I wanted to understand why this was happening.

It wasn’t until one day into my many days that were spent “researching” that I looked up suicidal thoughts but not really wanting to die versus suicidal ideation.  I stumbled into a story of someone with OCD who had a very similar story as mine. It was life- changing. I knew I wasn’t alone. This was OCD.

Around this time, things had gotten so difficult that I finally decided to see a psychiatrist and look into medications to treat my anxiety. This is when it all changed. After being assessed, they officially diagnosed me with OCD for the first time ever in my life. They recommended that I see an OCD specialist. I began my online search for providers. That’s when I found NOCD.

I was so thankful that I was able to be seen for treatment right away. Through my own research and the community at NOCD, I was able to recognize the lifelong connections I had to this illness. I was relieved. For so many years I had thought that this was just who I was. I had spent so much of my time searching for answers and trying to “feel better.” I thought my personality was flawed.

Recovery: more than a feeling

I have learned a lot in my journey with OCD. Recovery isn’t necessarily what I expected—initially I thought it was feeling better and not experiencing the uncomfortable emotions that I had. The answer to living with OCD and being happy was not to feel better; it was to allow myself to feel emotions that were scary or uncomfortable and to recognize that I could indeed get through them. Feelings aren’t good or bad—they just are. By living through the discomfort I learned that I had to sit with uncertainty. I could tolerate not knowing for sure. Maybe one day I would get sick, I had before and I had gotten through it.

I continue to work with my ERP therapist on the harm OCD, contamination and health OCD themes. The ERP looks a little different for each one and is very hard. But it works. Every day I wake up happier, healthier, and hopeful. I have noticed that OCD likes to jump from one fear to another, currently I struggle a lot with the thoughts that this may not really be OCD. I also worry that the OCD will latch onto other things in my life that I am passionate about or value. I know that OCD is known as the doubting disease. I find myself wondering “am I really getting better?”

I choose to live my life everyday and I am getting better. There is a community of people who struggle with this often debilitating disorder. There is hope and there is help. There is support and you are not alone.

I always thought that if I didn’t feel like I wanted to do something, even if I had maybe previously enjoyed doing it, it was me making that choice. Now I can clearly decipher the difference between me wanting or not wanting to do something versus the OCD telling me I shouldn’t do something.  I don’t need to let OCD run my life—I need to push myself to do the things I think I don’t want to do so that it can result in growth and more happiness.

I am a 23 year old who works in the marketing and business world. I have been in a long-term relationship for the past 6 years. I love hot yoga, being outside and hiking. I have a cat that I adopted 1 year ago.