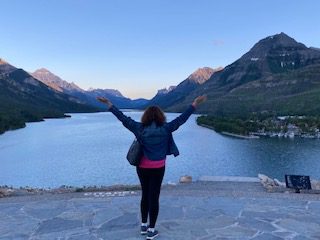 Hope is the true voice…OCD lies

My childhood was a difficult one, but it was also wonderful. My parents lost two other children through a stillbirth and miscarriage prior to my birth, so they were very overprotective over me and anxious that something bad would happen to me. They were the most wonderful parents, and I know their overprotection came from their deep love for me. I used to notice my dad doing things repeatedly as well, so I think he had OCD, but it was much less severe than mine. I was bullied as a child for getting good grades. I was so shy and stricken by social anxiety that I never spoke to my classmates or my extended family. Going to family get-togethers was the thing that I most dreaded. I didn’t want to be singled out by anyone by them saying, “Look! Melissa is talking!” I made up for it by having good friends to play with around where I lived. I was the opposite of shy with these friends. I overcompensated. Now, I have broken out of that social anxiety and have no trouble socializing with family or friends. When I got to high school, I made it a goal to be happier, and I was.

December 7th, 1987….that date will be ingrained in my memory forever.

When OCD came in full force, it felt like my brain “snapped”. My focus was on the separations between the environment, such as the kitchen table, and myself. I even noticed that my legs were separated from each other. I knew they were, of course, but it was just very strange and scary. I seemed to be in my own world, not okay at all. I believe these perceived “separations” were my brain’s way of keeping me safe from the world, the fear of being separated from the protection of my parents as I grew into an adult. This would become an ongoing theme. A couple of weeks earlier, a thought came in, “You’re getting older now. You have to get nervous.” I wondered where that came from, I was shocked by it.

I now realize that OCD started earlier than that. I had been repeatedly going over each school subject in my mind to make sure I did all of my homework. I knew it was excessive, but I didn’t realize what was happening. I felt alone and scared, even though I had the most wonderful parents. I didn’t want anyone to think I was “crazy”.

Three years later, the OCD morphed into making sure I moved the right way or I’d be possessed by the devil or my soul would go to hell. I was at college and could not move. I was stuck, trapped in my own mind. I had no choice but to call my parents, who were terrified. None of us knew what was happening, and I felt guilty for causing them pain. I dropped out of school and stayed in my house for several months. Finally, after I put up incredible resistance, I got help and slowly got better. Eventually, I went back to school and got my degree, with honors!

I’ve experienced a few bouts of insomnia, one happening when I moved into my own apartment. Symptoms seem to be strongest when I’m faced with a life change. Before I moved, a thought came, “You’re going to live on your own. You shouldn’t sleep.” I was so perplexed by this thought. It had appeared out of nowhere. This thought reminded me of a thought I had at age 16 when OCD struck me hard. The thought was “You’re getting older now. You have to get nervous.” I think it likely stemmed from a fear of facing life as an adult, my brain’s way of keeping me safe from the world. I was always over-protected as a child. I had difficulty adjusting to living on my own.

Over time, things were better, but then my dad passed away. This was a time of great stress in my life, again, a great change. I moved back in with my mom and cared for her. Things settled down for a bit, and OCD became quieter.

The next challenge and upheaval that I faced would come from meeting my, now, ex-partner. He treated me like a queen, yet I didn’t feel in love with him. Years were spent in constant doubt, confusion, stress, and anxiety. Looking back, I wonder if I was experiencing relationship-themed OCD (ROCD). I wanted the relationship to work, but it couldn’t. To this day, I still doubt my decision, but I’m usually good at making decisions. There is always so much doubt and uncertainty.

I faced losing my parents and living life feeling completely alone in the world, but still ended the relationship. A year later, I saw him and felt like I made a mistake. Maybe not, again, so much uncertainty. This time he treated me like I was worth nothing, calling me “neurotic and abnormal”, and putting me down. This was the greatest pain I’ve ever felt, and I’ve endured so much. OCD made it a thousand times worse, but I am now stronger and more confident. I still have hard days, and I’m a work in progress, but I’m much better.

I’ve been in therapy for decades, but didn’t really get the right help I needed for a long time. Many therapists are not trained efficiently to help someone with OCD. It’s terrible. Do not fight thoughts. Let them be, as hard as it is. Sitting with unwanted thoughts and feelings is an important piece of recovery. Fighting these thoughts and feelings makes it worse, along with googling and talking excessively about problems and worries. These are just sneaky compulsions that OCD uses. There needs to be a balance. OCD wants us to focus on thoughts and all of the worst-case scenarios. You have nothing to “get over”, and you’re not abnormal. When I try to put OCD away in my mind, it gets stronger.

OCD will attack what you value and fear the most. Don’t be ashamed or afraid to ask for help. Anyone who judges you is not worth your time. Surround yourself with people who make you happy and want the best for you. This matters so much. You need to know that you are not alone in your fight. Stay occupied with life and things you enjoy, not to avoid, but to get out of your head. It is important that you keep moving forward in spite of intrusive thoughts and feelings. Keep moving towards your values and the life that you want. I am so proud of myself, and I hope you are too.

As I said, I’m still a work in progress, but there is no human being on this earth who isn’t. I’m at a point now where I want to make the most out of every day, every moment, and it’s because I’ve been through so much. Please don’t ever give up. Exercise and taking care of your physical health can be an important part of the recovery process as well.

Sending you all love and best wishes for your recovery. WE ARE STRONG AND HAVE SO MUCH TO GIVE TO THIS WORLD. DON’T EVER FORGET THAT.