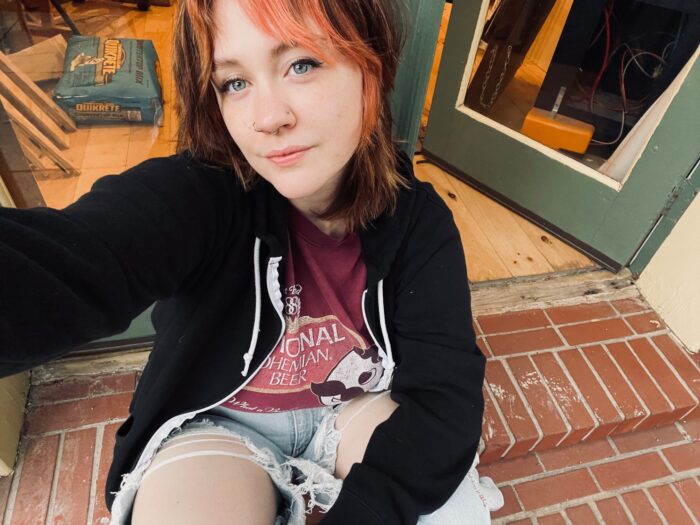 Consumed by OCD until I found hope with ERP

I think I have experienced OCD my entire life. In school, I had lots of insecurities. I wanted things to be “just right” and perfect. I remember feeling anxious and afraid all of the time. I would go to visit my grandmother and need to call my mom to feel okay. I was so worried that if I didn’t, something terrible would happen.

When I was younger I remember having distressing thoughts about animals. I worried they would be harmed, and this could send me into a spiral. I was too sad and scared to open up and share what I was experiencing. I wasn’t even sure I could find the right words for what was happening inside my brain. It felt all-consuming.

Due to my perfectionism in art, I stopped painting for 6 years. It was just too overwhelming for me. I developed what I would call weird eating rules and rituals. I felt like it was not okay if things weren’t done a certain way. When I was a teenager I had this thought, I was looking at a pizza that had sausage on it. I remember thinking what if this has humans in it? I was sent into a complete panic. I worried I could have been eating people. I avoided red sauce and anything with meat in it. Even stranger was that I only had to do this for the month of October. It was around Halloween when this first happened, so I think that is where the intrusive thought was linked to October.

During this time period in my life, I also made sure that things in my bedroom were evenly distributed and laid out symmetrically and perfectly. This theme tends to be reoccurring throughout my life. Particularly my art is impacted, and I judge it harshly.

As I became older, my fears started to shift. When 2020 hit, I felt like my brain broke. I entered my first relationship. My partner at that time had OCD. I started to deal with what I now know as ROCD. I would make lists about the relationship, I was overanalyzing every situation that arose. I was grieving the loss of the relationship, even before it had really started. It was a constant concern.

I was plagued by thoughts about being in denial about things. One of my obsessions centered around whether I wanted to have children someday or not. I felt like I needed to know right now. My partner at that time was certain they did not want children. It was difficult to live in the grey area, the unknown. I kept having thoughts that I needed to break up with him. I wanted a long-standing relationship but worried that I would do something to ruin one. I started to obsess over whether or not I wanted kids. I was only 21 at the time. I obsessively scrolled the internet looking for a doctor who would be willing to remove my fallopian tubes, so I could not get pregnant, it would make it permanent. I contacted my insurance company, I was actively trying to do this so that I could feel certain. I scheduled appointments to start the surgery and to show my commitment to being child-free for the rest of my life. I had my reasoning, the paperwork, and the approval from a GYN. Maybe part of me knew, but it was the wrong decision. I truly didn’t know what I wanted. I am actually terrified of surgery. I ended up not following through with the appointments. I started to equate that with feeling like I must be in denial, that I actually must want children because I didn’t follow through. Then I felt like I had been lying to myself and others. I went to great lengths to make myself feel better, always trying to get “the” answer, even to my detriment.

During lockdown my fears only exasperated. I was on Reddit forums constantly, searching for reassurance. I would message people I knew, again seeking assurance. At that time I was under so much stress that I was throwing up every morning, and not eating much, I lost 10lbs. I felt like my brain was going through a cheese grater. It was constantly churning out more and more things to be afraid of. I couldn’t work. I felt like every waking moment was consumed by OCD. I had always been a hard worker. I couldn’t figure out why I was late to work now, I would be stuck on my phone during work for hours, searching for answers. I wasn’t present for the work that needed to be done. I would leave work with a sick stomach. I was even reprimanded at work. This was a painful thing to experience, as I had always been such a diligent worker.

Nobody could figure out what was wrong with me. I had no insurance, no actual help, I couldn’t see anyone for medications. I felt so far gone by the end of the summer of that same year. I broke up with my partner at that time. I was crying daily. Mentally I was headed downhill.

I made a decision to move out of state with a friend. I didn’t end up getting along with them as much as I had thought. They tended to be messy, whereas I was tidier. I started to notice an extreme need for symmetry and for things to be just right. I wanted things to always be in their rightful places. I felt triggered multiple times per day and thought I had to “fix” things. It was a sense that it needed to be done immediately. I was facing unemployment. I had lost someone I loved, they passed away. Eventually, I realized that this living situation needed to change and I moved out.

I had an extreme obsession with the future, with the unknown. I became obsessed with tarot cards. I was doing readings multiple times per day. It was interfering with my ability to do other things. My trouble with concentration became a huge problem. The buzzing in my head, as I refer to the OCD as was getting louder and louder.

I began a great relationship and naturally OCD ran with it. ROCD themes started to creep in again. The fears and anxieties were about me. I was worried that I would do something to mess up this good thing. What if I ruin things? What if we were not supposed to be together forever? Again the uncertainties about what the future may hold snuck in. The more steps my partner and I made toward a stronger commitment, the louder the buzzing thoughts would get. I still deal with this, even to this day.

As many people do, I had bouts of questioning my sexuality, and who I am attracted to. In August I had a relapse. My partner was going away on vacation for 2 weeks. I was having so much stress at work. I started to again have intrusive thoughts about being a lesbian. SO-OCD took hold. I ended up taking a week off of work. I was having stomach pains. I felt sick every day. I felt like everything had become a trigger. I was googling why I felt like I did. What was wrong with me? I finally talked to a therapist who was doing traditional talk therapy but they mentioned NOCD. I had read a couple of the articles in the past from there. I decided to give it a try. I was at the end of my rope. I needed help. Calling was so very hard.

I told myself it was time to nip this problem in the bud. I could no longer live this way, I was no longer willing to. I knew something worse would come of me if I didn’t address it. So I took a risk, I opened up, and let the specialist help me. It was the best decision that I could have made.

I met Mary Beth Overstreet, who is a fantastic therapist. ERP is challenging. It is hard and it pushed me. I still struggle with living in the grey areas of life, the uncertainty. My brain seems to constantly want to call me a liar. I feel like I never fully know what I want. The difference now is that I have hope.

It is slowly working. For my exposures, I was asked to watch videos with gay couples in them and sit with the uncertainty of maybe that would be my life someday. I also wrote scripts where I would imagine my life in the wrong relationship. Some would be about me being a lesbian. I watched video clips of women talking about their sexual orientation, that one was very challenging for me. I watched as young lesbians spoke with older lesbians. I am still working on the harder exposures in my treatment.

My advice if you’re struggling with OCD

I think that it is so important to have a community around you. Having people who are readily available to talk to you and not provide reassurance, to let me know that I am not alone has been a tremendous help. I feel like that is what has helped me from going off the deep end. The community of people brings me hope.

The more I write the scripts and do the ERP, the easier it gets, and the less it feels like I am writing a death note. It takes the power away from intrusive thoughts. It has been worth it in every way. I am now able to access parts of me that have been hurting for a long time and find hope again. I want people to not just survive this, but to figure out how to thrive in spite of OCD. It is unfair that anyone has to live with OCD, to be in a constant state of fear and anxiety. The accessibility of NOCD has been life-changing.