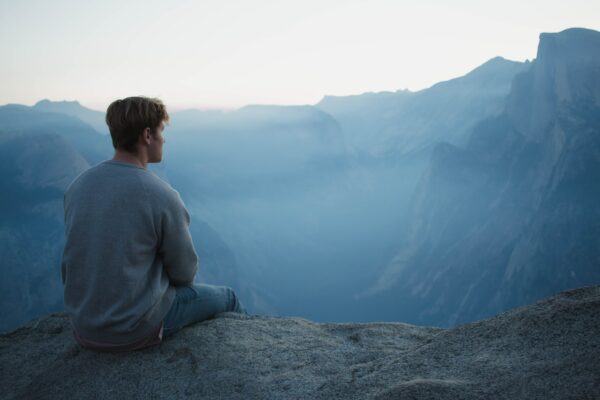 My life prior to my OCD onset might be defined by many as a dream come true. In addition to being a successful student-athlete, surrounding myself with great friends, and having a loving family in the suburbs of Chicago, I was at mental peace. When thoughts would naturally pass through my head, my brain would help me confidently navigate the day-to-day.

Then, one afternoon in late May 2014 my brain seemingly stopped working. I had a disgusting thought that caused me to question my character, and unlike what I had usually been able to do in the past, I wasn’t able to figure out how I really felt about it this time.

It was as if there was a disconnect between my brain and my emotional response. When pushing to logically disprove the intrusive thought’s merit, I couldn’t find an answer that brought me long-term certainty, which in turn caused me to doubt myself even more. In a span of only about 48 hours, my life snowballed into nonstop anxiety, to the point where I couldn’t understand what was real and what wasn’t.

My days were still filled with the same nonstop, high levels of distress. Unlike typical weeks that consisted of seeing friends, training for football, and working part-time, I primarily lived locked in my room, alone. My time was spent scrolling through social media, identifying pictures as “good and bad OCD days,” and marking the anniversary each month of the moment my suffering started. All I wanted was for my “old life” to return.

What I realized after getting treatment though was that yearning for my “old life” is a major waste of time.

Although it’s a very common reaction to OCD, especially when it becomes severe, yearning for your old life actually undermines the levels you can reach as a person with OCD in society, especially after receiving treatment.

Once managed, life with OCD can be even better than it was before OCD onset in the first place. Personally, my life is better now than it was before, since my experiences made me more resilient. Others feel the same.

Take it from people on the NOCD team:

“My original goal when I got diagnosed with OCD was to go back to the person I was before OCD hit. I even used to keep a photo of myself from my senior year of high school by my bed, because all I wanted was to be her again. She was ‘normal,’ and who I thought I needed to go back to.

Something changed by the time I completed Exposure and Response Prevention (ERP) therapy. After I put in the time, effort, perseverance, and consistency, I got to a point where I realized my goal was not actually to be her anymore. I didn’t realize it in real-time, but I had become a better version of her; a better version of myself.

What that meant for me was that I gained a level of personal and mental freedom I had never known – not even before I began struggling with severe OCD. The biggest freedom of all was being in full control and able to make decisions of my own and on my own without OCD dictating my every move.

I thought I knew what control was, and I thought I played a part in it by surrendering to OCD. In reality, I didn’t even realize what control really meant until I started doing ERP. Stepping back and not feeding into OCD is where the real control lies.

From there, a whole new world opened up. Everything changed, my quality of life improved, and I decided I never needed to go back to my old life.

Even though you can’t change the fact that you have OCD, there’s life on the other side of this disorder – and it can be better than anything you’ve experienced before. OCD blinds you so you don’t see that, but you owe it to yourself to see what life is like without OCD controlling you.”

“After treatment, you not only realize that giving into OCD is not a helpful way to live, but you also gain a belief in your ability to do difficult things and succeed. This sense of empowerment, self-esteem, and self-efficacy makes life better than it was before, and it’s something you will have forever and can apply in all areas of your life – far beyond OCD.

The biggest takeaway the members I work with have is that they realize their struggles are not really about their OCD fears – be it their fear of knives, germs, blood, injuring a loved one, or anything else – it’s actually about their negative relationship with anxiety and doubt in general.

Treatment helps you learn how to accept this uncertainty. Instead of avoiding it or treating it as a threat, you can start to perceive ambiguous or uncertain situations as ones you can face. It may take courage, but you learn you can overcome anxiety. Eventually, your brain switches and learns that it isn’t so terrible after all, and you don’t need to give in to OCD.

Life after beginning to effectively manage OCD provides new learnings, feelings, experiences, and opportunities. You appreciate the things OCD once took away from you much more, so they can bring you greater levels of joy than they did even before OCD surfaced. You’re able to believe you can do anything because you’ve been through experiences where you’ve had to test this belief. And you can do anything!

Many of my members who have embraced treatment feel empowered in ways they haven’t before, and they’re more in control of their fears and behaviors than they ever thought they could be. They’re able to use their new knowledge in areas that might not be related to their specific OCD struggles, like social encounters, job opportunities, new adventures, and more.

Once you apply the skills you learn in treatment to life in general, there’s practically no way your life won’t be better!”

“I’m a totally different person now than I was before OCD. My OCD journey has shaped my life, and I’m stronger than I’ve ever been.

It wasn’t always that way. When I was in the depths of severe OCD, I would sit and spiral for hours. There were so many times where I would fall down a rabbit hole, and it felt like it would never end. I’d end up having panic attacks or putting myself in danger.

I didn’t even realize what was going on, so I had no idea how to communicate what I was going through with others, let alone how to pull myself out of it. I felt completely isolated, out of control, and like I couldn’t trust myself.

I eventually discovered I had OCD. Like anyone else, all I wished for was to be back to where I was before this suffering started. OCD was ruining my life.

Everything changed once I learned how to navigate OCD. ERP in particular is such a proactive form of treatment that if you put in the work, it puts you into a much better place and makes you stronger. Now, I’ve gained a sense of independence that I never had before. I’m better at decision-making and am equipped to handle intrusive thoughts.

I’ve grown, and OCD doesn’t affect me the way it used to. It’s such a surreal feeling to be at this place where I’m so comfortable with myself – which is a feeling I’d never had, even before my OCD got so bad. I turned my experiences into something positive by becoming a better support to other people, too, and do what I can to help them as they work to overcome OCD.

What I’ve learned most of all is that recovery is not returning back to where you started; it’s being able to do things you once thought you’d never be able to do. You’re not your OCD – it’s one aspect of your story. With the right care, your story can be better than it was before.”

Where to get help

Remember, if you’re struggling and feeling as if nothing is working, there’s still hope. Getting better starts with knowing where to turn, and my team and I at NOCD are here to help. You can book a free 15-min phone call with our team to learn more about starting treatment with a NOCD Therapist. If that isn’t for you right now, we can help you find other therapists or treatment resources.